The cycle route starts from Piazza Bra in Verona, a city declared a UNESCO World Heritage Site, and continues going into the Lands of Custoza in the direction of Salionze, where it connects to the cycle path along the Mincio river to direct towards Mantua, connecting to the bike path coming from Peschiera sul Garda. In this second section, the Mincio river is the absolute protagonist and accompanies the cyclists to Mantua, where it forms the three lakes that surround the city.
From Mantua the route continues towards Governolo and, crossing the Po river , towards San Benedetto Po, a very important junction because in this point two of the most important European cycle routes intersect: Eurovelo 7, the "Middle Europe Route" that from North Cape goes to Malta, and the Eurovelo 8, the "Mediterranean Route" that from Cadiz in Spain reaches Athens in Greece.


On the border between the Province of Mantua and the Province of Modena, the itinerary continues on the bank of the Secchia river up past Concordia sul Secchia.
Here the route forks: a branch points towards Mirandola and connects to the cyclopedestrian path along the disused Bologna–Verona railway line (currently works are in progress), still remaining on the plain; the other branch continues towards Modena and towards the mountainous area of Vignola, Zocca e Vergato.

The latter enters the city of Modena through the cycle path built along a section of the Modena–Mantua disused railway.The route exits the city heading south and arrives at Vaciglio where you take the cycle path created on the former Modena-Vignola railway. From Vignola follow the itineraries: "Via ciclabile dei ciliegi" and "Percorso Natura Panaro" till you reach the village of Casona. From here the route rises of altitude on a low traffic asphalted road crossing the Regional Park of the Sassi of Roccamalatina.The itinerary continues through some villages as far as Zocca, and from here up to the border with the Province of Bologna, and then it reconnects with the provincial road SP25 as far as Vergato, where it connects with the section of the route that passes trough the territory of the Metropolitan City of Bologna.

The plain stretch of the route, forking from Concordia Sul Secchia, continues eastwards through low-traffic secondary roads as far as Mirandola. It's in Mirandola that the cyclopedestrian path along the disused Bologna–Verona railway line starts. The route reaches Osteria Nuova (Sala Bolognese) through the municipalities of San Felice sul Panaro, Camposanto, Crevalcore, Sant'Agata Bolognese, San Giovanni in Persiceto, Anzola dell'Emilia. The project has been designed entirely by the Metropolitan City of Bologna and works are currently in progress. The construction site, coordinated by the Metropolitan City of Bologna, started in April 2019. The work was financed by funds from the Environmental Collegato (Law 221 of December 28, 2015) for a total amount of 5 million euros.

From Osteria Nuova train station, the route continues towards Calderara di Reno from which you can get to Bologna. In the feasibility study, the route connecting and crossing Bologna was oriented on a route along the Reno river (benefiting advantage from the landscape quality of the riverbed). This offers a new opportunity of connection to the city and a better experience for cyclists, both urban and cycling tourists, to rediscover parts of the city often hidden from view.

Coming from Calderara, the route along the planned bicycle path , which will pass through the woody area (still to be created) north of the airport , is routed along the west bank of the Reno river passing under the highway/ring road, the railway and the via Emilia until, near "La Barca" sports center , it crosses the Reno river with a new cycling/pedestrian bridge, finally connecting the Barca area directly with Borgo Panigale area.


The route forks and on one side it allows the connection with the historical centre and the Train station of Bologna (through the existing radial connections or those ones planned to be developed in the future) and on the other side it allows the continuation of the route towards Casalecchio di Reno and the Appennines.
In Casalecchio di Reno you reach Parco Talon continuing on the right idrographic side of the Reno river along the cycling/pedestrian path up to the cycling bridge that allows you to move to the opposite bank of the river and get to the site of the former quarries, the Maglio lakes, Palazzo Rossi, reaching the small town of Sasso Marconi and from here to the entrance of Marzabotto where you return to the left hydrographic side of the river.Within the financing of "Patto per Bologna" a contribution of 2.5 million euros has been provided for the "Creation of the path for pedestrians and cyclists of the Reno river – Functional extract of the Sperticano-Riola bridge", which envisages the construction of the path in the stretch of territory connecting Pian di Venola with Riola di Vergato. Intermodality is ensured by the railway stations of Marzabotto, Pian di Venola and Pioppe di Salvaro.
From Riola, along the side of SP62, there is a cycle path as far as Ponte di Verzuno, passing from the Reno Valley to that of Limentra, coming across the church of Alvar Aalto and Rocchetta Mattei. From here you follow the SP23 to the Suvian basin and then you reach the regional border.
The strech from Riola to the regional border is the most demanding one because of altitude and can be overcome, in part or totally, using the train (along the Bologna- Porretta Terme- Pistoia railway line), going up to Riola Station and taking the train to PorrettaTerme (Riola, Silla, Porretta Terme, Ponte della Venturina), also as a supplementary route that avoids completely the differences in altitude of the Appenines. From Riola to the regional border it is possible to choose an alternative route that connects Riola with Silla and Porretta Terme through the ridge road between the two valleys of the Reno and Limentra, a very suggestive and scenic landscape.

From the regional border along the provincial road SP24, the route crosses the Natural Reserve of Acquerino-Cantagallo, arriving at Candeglia from which you can connect with the historical centre and the train station of Pistoia (intermodal connection point with the Pistoia-Porretta Terme railway line).
Proceeding eastwards, in the direction of Prato, the main track crosses the urban area of Montale and Montemurlo. From Prato the itinerary turns south and crosses the territory of Campi di Bisenzio, developing into urban and peri-urban areas of various villages as far as San Donnino. It is from here that starts the cycling loop crossing the city of Florence in the direction East- West along the right and left banks of the river Arno. The connection with all the most important monuments of the city of Florence is ensured by short sections passing through the historical centre. 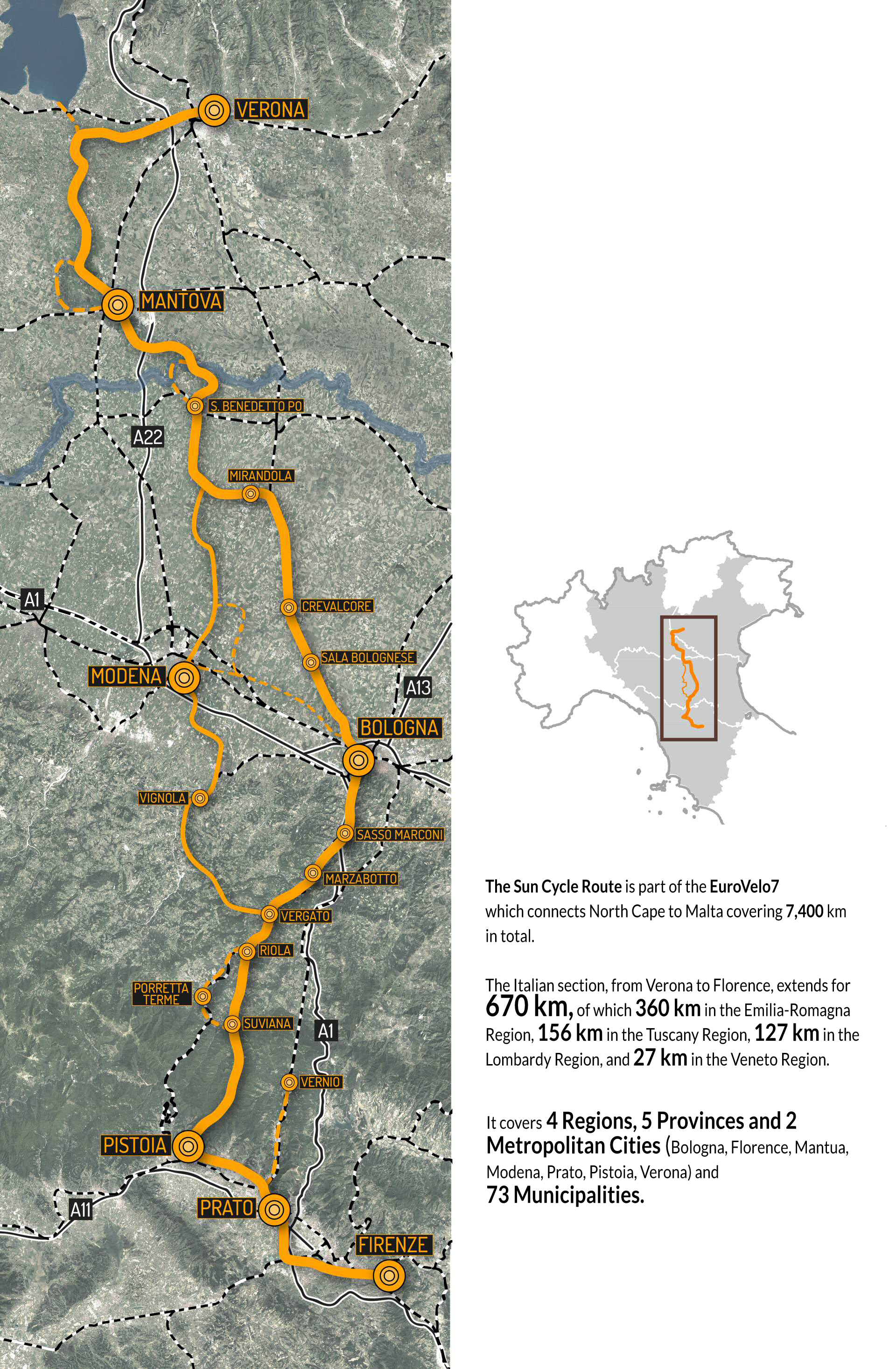